“Where the great had failed, the small succeeded . . .  Muskrat teaches us about ethical conduct, the action necessary to ensure that Creation continues.  Muskrat informs us about our relationships with each other and with the natural world, including teachings about cooperation, respect, honour, humility, bravery, love and sacrifice.”–Professor Deborah McGregor. www.muskratmagazine.com/teachings-from-the-muskrat/

Recently, while on a six day road trip through Wisconsin and up around the north end of Lake Michigan, we spent a night at the Kewadin Hotel/Casino in St. Ignace. The casino, which turned out to be quite nice, is operated by the Sault Ste. Marie Tribe of Chippewa Indians.

Our visit there was memorable for three things: a restaurant that served one of the worse New York trip steaks I’ve ever tried to eat, the casino that (for lack of a better expression) scalped me for a little over one hundred dollars at its crap table, and (as it pertains to this blog post) for a very moving, Ojibway creation story written upon one of the walls of the hotel’s lobby. It recounted the story of how the muskrat saved the world. But before I tell the story, here are a few tidbits of information regarding the creature. 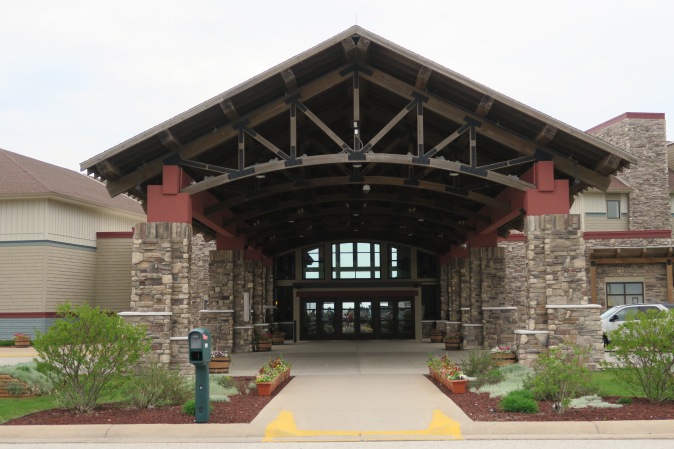 Most people today, I believe, don’t give the muskrat too much thought. Many farm boys–and even a few farm girls–back when I was a kid used to trap the critter every fall for a little extra spending money. And, every once in a while, I’ll see one hit in the road between the two ponds that lie on either side of the road just south of our village; but that’s about it. But from my researches that were inspired by the story on the casino wall, it turns out that the muskrat plays a very important part in Native American Creation stories.

As a matter of fact, the word muskrat probably derived from the Algonquin word muscascus. Its scientific name Ondatra zibethicus has quite an interesting story as well. The genus name Ondatra is fairly straightforward, deriving from the Huron word for animal. The species name zibethicus is from the Latin word that describes anything that smells musky, and in turn, is itself derived from the ancient Arabic word for the Asian mammal called the civet cat (sinnawr al-zabada.) For over a thousand years, the perfume industry has made use of a compound called civet musk, or civet oil. This musk is harvested by removing the oil from the secretory pouches of the Asian (and African) civet cat and sells for $200 a pound!

As promised, here is the story from memory as it was written on the wall of the casino lobby–paraphrased and with some help from www.muskrat.com).
Long ago, the first peoples of the earth strayed from their harmonious ways and began to argue and fight with one another. Seeing that harmony and respect for all living things no longer prevailed on Earth, Kitchi-Manitou decided to purify it all. He did this with water, which came in the form of a great flood, destroying all people and most of the animals as well. Only Nanaboozhoo was able to survive, along with a few animals and birds who managed to swim and fly. Nanaboozhoo floated on a huge log searching for land, but none was to be found.
Finally, he spoke: “I am going to do something. I am going to swim to the bottom of this water and grab a handful of earth. With this small bit of Earth, I believe we can create a new land for us to live on.” So he dove into the water and was gone for a long time. Finally he surfaced, and short of breath told the animals that the water is too deep for him to swim to the bottom. Then a loon tried, then a mink, and then a turtle. None were successful. All failed, and it seemed as though there was no way to get the much needed Earth from the bottom. 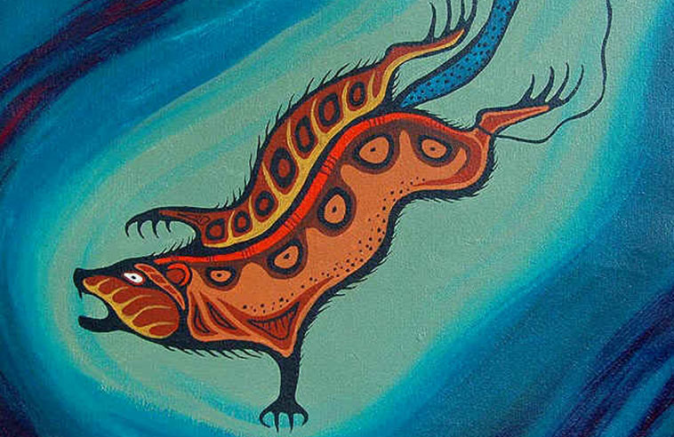 Then a soft muffled voice was heard. “I can do it!” At first no one could see who it was that spoke up. Then, the little muskrat stepped forward. “I’ll try,” he repeated. Some of the other, bigger, more powerful animals laughed at muskrat. But the muskrat was not to be denied and without further discussion, dove into the water.
He was gone much longer than any of the others who tried to reach the bottom, but just as his held breath was about to give out, the muskrat thrust his paw forward toward the earth. The brave little muskrat had given his all; an hour later he floated to the surface, dead. A song of mourning and praise was heard across the water as Muskrat’s spirit passed on to the spirit world.
But upon closer inspection, it was discovered that the tiny paw held a precious ball of earth. The animals all shouted with joy. Muskrat sacrificed his life so that life on Earth could begin anew.

“Traditional Indian people, including the Ojibway, hold special reverence for the muskrat who sacrificed his life and made life possible for the Earth’s second people. To this day, the Muskrat has been given a good life. No matter that marshes have been drained and their homes destroyed in the name of progress, the Muskrat continues to survive and multiply. The Muskrats do their part today in remembering the great flood; they build their homes in the shape of the little ball of Earth and the island that was formed from it.” http://www.pipekeepers.org/uploads/3/1/3/0/31306445/the_creation_story.pdf

Additional Credits and Resources by the original authors: *Well worth the extra time to read!