Our Thanksgiving Turkey: How A Bird Native to Central America Came to be Named After a Country Located in Western Asia

The First Thanksgiving at Plymouth. By Jennie Augusta Brownscombe (Wikipedia)

A lot of people probably don’t know that the bird at the center of our traditional Thanksgiving feast originated in Central America and southern Mexico. The Aztecs called the bird huehxolotl (pronounced way-sho-lotl) and it was originally domesticated from a now extinct wild species native to that area of the world. * A thank-you to my friend Charlie Wolff, Inca and Aztec language scholar, for the pronunciation of this unusual word.

How this bird, that was native to Christopher Columbus’s New World, came to be named after an ancient Old World, eastern Mediterranean country (Turkey) is a matter of considerable controversy. Even the scientific name for our Thanksgiving bird –which usually can be depended upon to shed some light on a specie’s origin–is confusing! 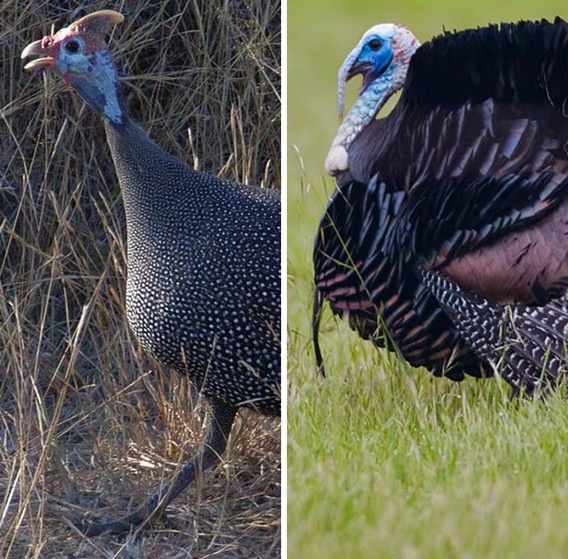 The official scientific name for the bird we in America call the “turkey” is Meleagris gallopavo gallopavo (from the Greek word Meleagrid, meaning Guinea fowl, and the Latin words gallo and pavo meaning chicken and peacock). This species should not be confused with their close cousins, Meleagris gallopaveo sylvestrus, who are the wild Turkeys we see in our local farmer’s fields.

One theory says that the original Spanish conquistadors who conquered and then decimated the native Aztecs thought that the bird looked a lot like the Guinea fowl–a then common domesticated European bird that was a bird native to Africa–whose nickname was the “Turkey bird.” And the reason the African Guinea fowl was called the Turkey bird was that in the early 1500s the bird was being traded and sold in southern Europe and the Middle East by the Ottoman Turks, who at the time, controlled the sea and overland trade routes to the continent of Africa. When the conquistadors brought their new Guinea fowl-looking bird back with them from Central American, the designation Turkey bird stuck.

Eventually this new Turkey bird spread all over Europe and Asia where it was successfully domesticated into the various different breeds that exist today. When the English settlers arrived in the 1600s in what is now our American northeast, they noticed a wild bird that looked a lot like the “Turkey bird” they had back on their farms in England. And even though the wild bird was no direct relation to the original Central American (maybe distant cousins) species, the name turkey again stuck.

A third possibility for the word turkey (and one that I kind of like) was from a December 13, 1992, New York Times article that claimed the New World fowl’s name was actually given to it by Christopher Columbus’s interpreter. The explorer’s interpreter, a Mr. Luis de Torres, was a Jewish convert to Catholicism. When he first saw the bird it reminded him of the peacock, a bird then common throughout Europe and Asia, but originally native to India! And the ancient Hebrew word for peacock at that time was tuki.

← 11th Pennsylvania Infantry, the Gettysburg Battlefield, and An Amazing Dog Named Sallie
THE TUNE THE OLD COW DIED ON: JUST WHEN I THOUGHT I’D HEARD IT ALL →